I remember how we used to go to offices and huddle around discussing the one TV show we’d all watched the previous night, like Mad Men. There was no water cooler per se, but apparently not too many years before then all non-work-related office chatter was required by law to take place around one, and so we would still call these water-cooler shows.

We’ve lost our offices, and our water-cooler shows too; but reclaimed a water cooler of sorts.
It’s called Slack or (particularly outside the U.S.) WhatsApp.

But the notion of a water-cooler show was killed by the Balkanized streaming entertainment universe, where we each get to play at being our own Jeff Zuckers, setting an idealized primetime schedule of Must-See TV for a demographic of one (or two, in happy relationships).

The water-cooler audience disassembled gradually. There was the time we all watched the same shows; then there was the time we all knew the shows we were supposed to be watching but couldn’t keep up, and consoled ourselves with the knowledge that we could watch things at our convenience. And now’s the time when we don’t even know or can’t agree on what the common core TV curriculum is. How many times a week does someone Slack that something you’ve never even heard of is one of the best shows ever?

Paramount+ is the latest streaming service to launch—or at least rebrand and relaunch, given that it’s the sequel to CBS All Access. It’s also the latest streaming service to feel compelled to put a plus sign in its name, a nod to these platforms’ all-you-can-consume-for-one-price buffet business model. Slate was early to this branding trend, offering Slate Plus memberships to avid readers, but in an effort to zig when others zag, Future Tense is currently exploring rebranding itself as “Future Tense =.”

Paramount+ is one of seven (!) streaming services I subscribe to, not because I felt the 28,153 sitcoms and 371,419 movies I can already click on with my half-dozen other streamers might prove insufficient, but because ViacomCBS recently decided to become interested in the world’s sport and acquired exclusive rights to the European Champions League matches. It was the conglomerate’s way of forcing us hardcore soccer fans to join Trekkies for a mixer on its platform.

We’d already been forced onto Peacock by NBCUniversal’s exclusive access to English Premier League, though someone in that shop really needs to figure out how to allow subscribers to stream matches (often played in the middle of our weekdays on this side of the Atlantic) on demand after they’ve been played, without being forced to see the score on the platform. I mean, c’mon NBC, you’re the network that used to plug summer re-runs with “If you haven’t seen it, it’s new to you” promos.

As for my other streaming services, there’s another on account of sport, the one you get if you don’t want to pay for shipping, one that was passed along to me by my cable provider (I know, I know, that needs to go), and Ted Lasso has brightened my life because I bought a new phone within the last year. The only streaming service, come to think of it, that I pay for each month for its own sake and unrelated to my sport fandom (though don’t get me started on how fantastic its new Pelé documentary is!) is Netflix, which is fast becoming a sort of default “broadcaster” of streamers.

Along those lines, Future Tense held a conversation on the future of entertainment on Tuesday with Michael Burns, vice chairman of Lionsgate, the studio which also owns the Starz network and 3Arts Entertainment. (3Arts is a partner on our Future Tense Fiction project—and we have a new story out today, by Leigh Alexander.). Burns was bullish on the notion that we will all be returning to theaters after the pandemic, pointing to strong box office receipts in China as leading indicators of what the return to normalcy will look like.

Burns said that in an environment in which many of the major studios “hoard their own product for their own platform,” Lionsgate will seek to remain a “benevolent arms dealer” selling content to a wide range of distributors, including its own Starz.  He thinks being a seller in a market with fewer sellers can only bode well for the value of the studio’s library.

When asked how many streaming services we’re expected to pay for, Burns answered that people in the industry assume many of us will subscribe to four or five streaming services. He hopes that includes services like Starz, which do not profess to be all things to all people. Burns said that in what could look like history repeating itself, we may soon see the rise of streaming-service bundlers to play a role not dissimilar from your cable operator of yore, to consolidate your bills and cut down on churn. However, Burns did preface most of his answers with the refreshing caveat that his is an industry in which “no one knows anything.”

But speaking of history repeating itself, studios hoarding content for their own platform, and Paramount+, aren’t we heading into a new era of vertically integrated entertainment providers that looks a lot like the early days of the Hollywood studio system?

The story of the Netflix-versus-Disney+ rivalry is the story of how a distributor came to create its own content and how a producer of content came to create its own distribution platform. To every studio an OTT platform, and to every tech platform a studio. And the next phase of the streaming wars is the scramble not only to sign up subscribers, but to lock up talent in multiyear exclusive deals.

The old studio system, in which Hollywood players sought to control the production, distribution, and exhibition of movies was broken up by federal antitrust regulators, a long effort which culminated in the landmark 1948 U.S. v. Paramount [no +] Studios Supreme Court decision. That case and its ensuing consent decrees enshrined in law the separation of content creation and distribution in cinema (preventing studios from owning theater chains or coercing them into exclusive deals, for instance), a principle that broadcasting laws and FCC regulations also imposed on TV land.

It’s an open question whether the same concerns that applied to vertical integration of the industry in the 1920s and 1930s apply in such an altered landscape in the 2020s and 2030s, given all the other factors introducing competition in the mix. But what’s undeniable is that the old restraints against such integration are gone. Just to make that perfectly clear, the Trump administration’s Department of Justice obtained a court ruling in 2020 to terminate the old Paramount consent decrees, which means, among other things, that a Disney, Netflix, or Amazon could acquire the AMC chain.

Stay tuned—or streamed, rather. For now, the key is to keep track of your subscriptions, and to avoid getting too annoyed when colleagues Slack you that YOU HAVE TO WATCH some show about soccer (!), or a Bulgarian political drama THAT IS SO YOU.  As for how it all plays in the end, who knows, but I am sure Peacock will be there to provide me with unwelcome spoiler alerts. 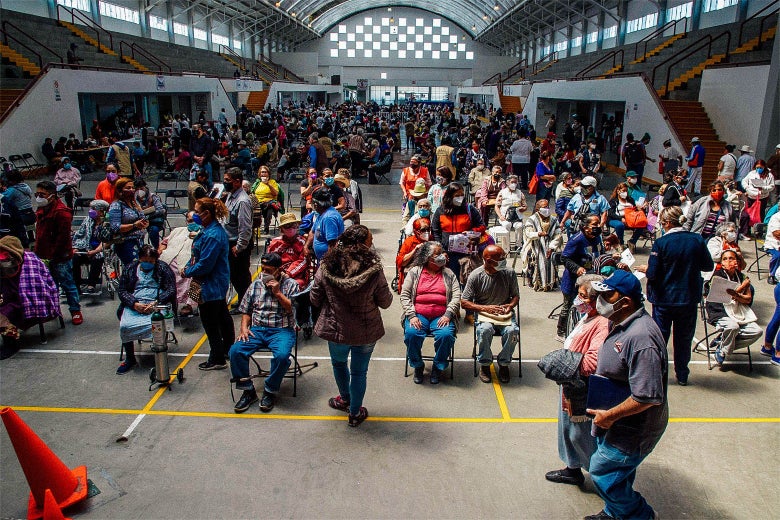 The Mexican Elites Who Are Traveling to the U.S. to Get Vaccinated 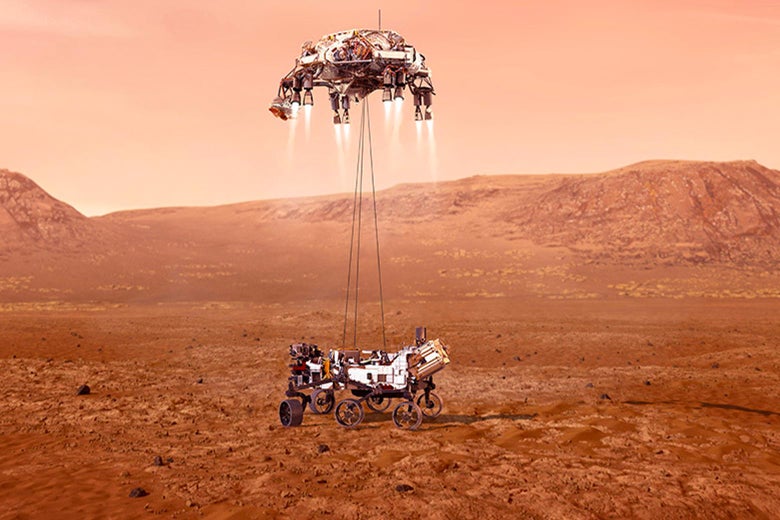 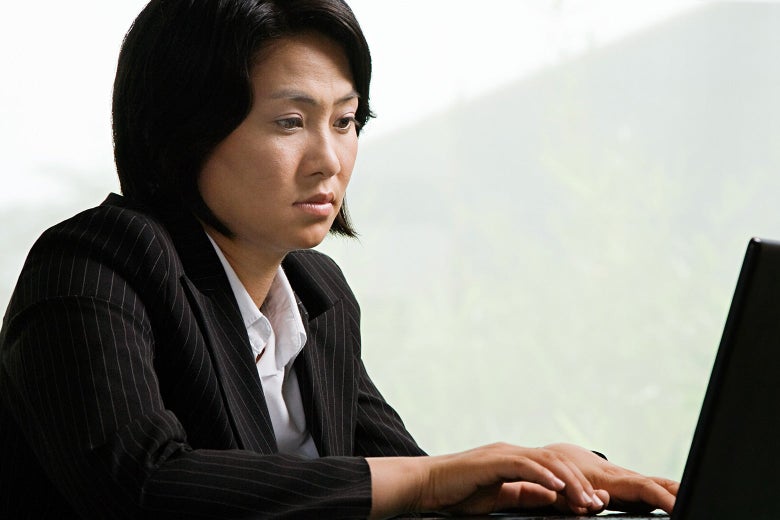 “Why Plus Is a Minus When Naming Your Streaming Site,” by Tiffany Hsu, the New York Times

Graphic novelist Tim Fielder’s new work, Infinitum: An Afrofuturist Tale, is a must-order for those who love Afrofuturism and stunning artwork. The story follows an African king, Aja Oba, who has been cursed with immortality and spends his years wandering across countries and galaxies. During his travels, he grapples with racism, classism, the expansion of global technology, the cost of war, and the meaning of home on Earth and beyond. That may sound like a daunting amount of grappling but Fielder’s easy-to-follow writing style and impactful graphics make the pages fly by.—Riley Davis, Future Tense research and events associate

On this week’s episode of Slate’s technology podcast, host Lizzie O’Leary spoke with J.R. Hennessy, editor of Business Insider Australia, about how Australia went to war with Facebook. Last week, she and Josh Rhodes, research associate at the Webber Energy Group at the University of Texas at Austin, talked about the spectacular failure of Texas’ energy grid.

• Agent Sonya: The Most Consequential Spy in the History of Technology?, Wednesday, March 10, noon Eastern