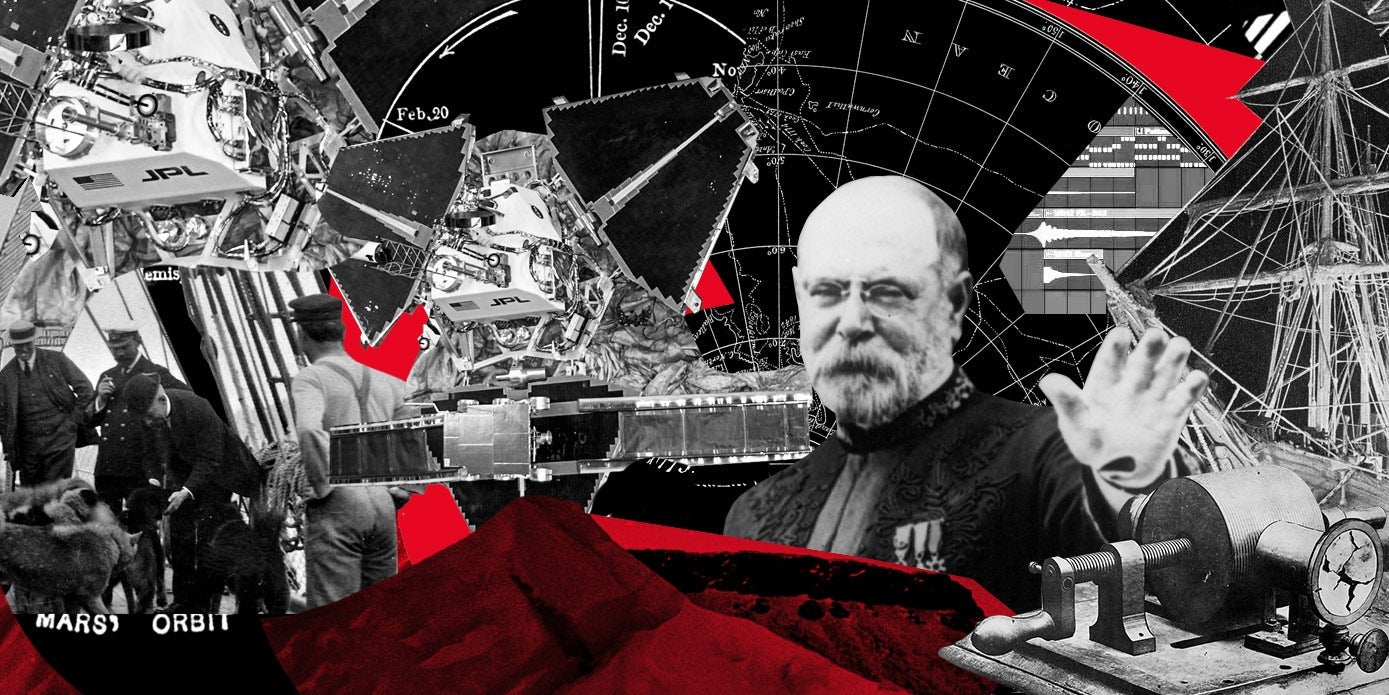 New technology sometimes makes the world around us look unrecognizable. Photo illustration by Lisa Larson-Walker. Photos by the Library of Congress.

Listen to the show in Apple Podcasts, another podcast player, or the player below.

Computers can write music now. They’re actually not awful at it. And they’re much quicker and cheaper than human composers, without any of the ego or ambition, making them an appealing choice for anyone who needs a tune on a tight budget. You might soon hear songs written by artificial intelligence playing in the background of radio ads, YouTube shows, or video games.

A.I. has not yet penned a Top 40 hit. But it gets more talented every day. It’s likely a matter of time before a song composed entirely by a computer is rocking dance floors and climbing pop charts.

The way a computer learns to compose is by listening to whatever music you feed it and then analyzing the patterns it finds. Which raises the question: Who gets the songwriting credit—and banks the royalties—when the composer is a neural net that wrote its hit jam after imbibing, say, the entire catalog of the Beatles? Would you divvy credit between Lennon, McCartney, and whichever hoodie-clad coder programmed the software? When I spoke to the general counsel of BMI, an agency that defends songwriters’ rights, he chuckled as he confessed that nobody knows exactly how this will all shake out.

If there’s one thing we’ve learned in making The Secret History of the Future—our podcast that unearths the tech quandaries of yesterday and uses them to predict the shape of tech’s tomorrow—it’s that solutions to today’s problems are often found lurking in the past. In this case, there’s much we can learn from a story about another cutting-edge technology that once ripped apart the music business. It was called the phonograph.

When Thomas Edison invented the phonograph in 1877, it was the first time that humans could record and play back sound. And suddenly, instead of just playing concerts for cash, professional composers could also sell recordings of their music to the masses. Seems like fantastic news for the songwriters, right? But it wasn’t that simple.

Another cutting-edge technology once ripped apart the music business. It was called the phonograph.

The most famous American composer of his era—the equivalent of today’s mega rock stars—was John Philip Sousa, a bandleader who wrote military marches in the late 19th century that still get played today. (It’s a good bet you heard “The Stars and Stripes Forever” on the Fourth of July.) Sousa earned a fortune from barnstorming the country on his concert tours and from selling the sheet music for his compositions. But when the public began to buy phonograph recordings of his songs, Sousa discovered that he didn’t receive a dime from the sales. There were crucial flaws in the existing copyright laws, which had failed to keep up with the advance of technology.

What Sousa did next doesn’t just make for a fascinating yarn. It also prefigures copyright disputes that arose when the new technology of digital sampling exploded on the hip-hop scene in the 1980s. And it offers clues about what to do when it turns out the next John Philip Sousa is an A.I.

This is one of many stories you’ll hear in Season 2 of The Secret History of the Future. My co-host, Tom Standage, and I are back with another 10 episodes of this trans-Atlantic collaboration from Slate and the Economist. Last year, we told you about a pair of black-hat hackers from the 1830s, a chess-playing robot from the 1770s, and a bunch of influencers from the 1600s who made the fork happen, transforming it from a weird curiosity into an essential utensil. This year, we’re bringing you a whole new collection of curious tales and colorful characters from yore, in search of insights to help us navigate the big tech problems looming ahead of us.

… what the world’s oldest computer program, written by Ada Lovelace in 1843, can tell us about algorithmic bias today …

… why bicycles were the hot dating apps of the 19th century …

… and whether past mistakes using forensic fingerprinting can help us avoid new pitfalls with DNA evidence.

New technology sometimes makes the world around us look unrecognizable. But human nature—even over the centuries—remains remarkably familiar. Again and again, as we’ve researched the stories that go into these podcast episodes, we’ve seen that the past is full of hints about what’s coming around the corner. We hope you’ll join us as we reveal The Secret History of the Future.

Seth Stevenson is a frequent contributor to Slate. He is the author of Grounded: A Down to Earth Journey Around the World.