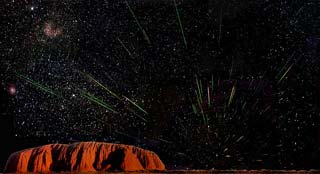 Every year, in November, the Earth passes through a stream of rubble and debris shed by the comet 55P/Tempel-Tuttle. Most of this junk is very small, like grains of sand or smaller. As the Earth rams this stream, the flotsam burns up in our atmosphere, and we get a meteor shower.

This is called the Leonid meteor shower, because the geometry of the event makes it look like the meteors are coming from the region of the sky in the constellation of Leo. It’s usually not a great shower, producing a couple of dozen meteors per hour.

But every now and again, the Leonids undergo a huge burst, a tremendous increase in the number of meteors. The biggest surges happened in 1833, 1866, 1966 and 1999… so with a 33 year period, but with some gaps. Basically, the comet sometimes sheds large numbers or particles, which then orbit the Sun on roughly the same path as the parent comet. So every 33 years – the same period as the comet itself – the clumps of particles are in the part of their orbit where we can smack them. They aren’t always in exactly the same spot, so sometimes we miss them. Hence the gaps.

The exact times and number of meteors for these surges are hard to know. But techniques have been getting better, and by studying the Leonids from a few weeks, ago, astronomers are predicting a minor storm next year in November 2009. According to their calculations, in 2009 we’ll pass through the debris stream shed by the comet in the year 1466. Sure, that was over 500 years ago, but in space things sometimes evolve slowly, and the dust/ice particles are still clumped up together. So now, even half a millennium later, we can still see a pretty good show as we plow through them. In 2009 we might see as many as 500 meteors per hour, or one every 7 or 8 seconds.

I like the Leonids. The comet orbits the Sun in the opposite direction the Earth does, so we ram these guys head-on. That means they are moving much faster than regular meteors, which in turn means they really zip across the sky and burn up much brighter (the energy of motion depends on the velocity squared, so they pack a punch). But the weather! I watched them in Virginia in 1999, and it was killer cold out. In California it was always foggy, though one year we had a hole in the fog directly overhead, so my daughter and I did get to see a few.

The worst part is that the showers are best after local midnight, so we’re talking 2:00 a.m. or so. That’s tough, even on this amateur naked-eye astronomer. Making it worse, the storm next year favors China, and not the U.S., so staying up late may not pay off so well.

Still, I imagine I’ll take that chance. Meteor showers are a lot of fun, and it’s a chance for me and The Little Astronomer to lie out under the stars and talk. That’s always worth it.