Ahmad Chalabi spent decades trying to return to Baghdad. Thanks to the Americans’ war, he finally got his wish.

We're sorry, but something went wrong while fetching your podcast feeds. Please contact us at plus@slate.com for help.

Eighteen years have passed since the United States invaded Iraq. It’s a war that killed hundreds of thousands of people and destroyed America’s credibility on the world stage. How much can that war be traced to one Iraqi exile’s longstanding quest to return to Baghdad?

Season 5 of Slow Burn is produced by Noreen Malone, Jayson De Leon, and Sophie Summergrad, with mixing by Merritt Jacob and production help by Margaret Kelley.

Baer, Robert. See No Evil: The True Story of a Ground Soldier in the CIA’s War Against Terrorism, Crown, 2002.

Draper, Robert. To Start a War: How the Bush Administration Took America Into Iraq, Penguin Press, 2020.

Isikoff, Michael and David Corn, Hubris: The Inside Story of Spin, Scandal, and the Selling of the Iraq War, Crown, 2006. 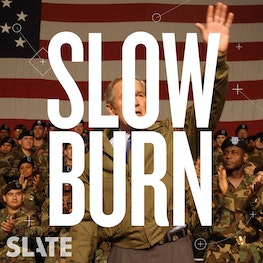 Who Was Ahmad Chalabi?

More on the divisive figure from the people who got to know him.