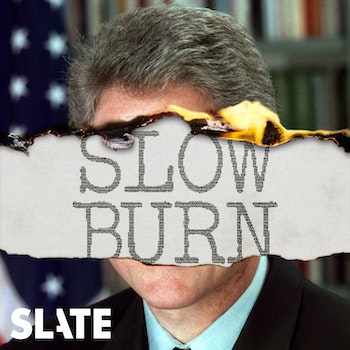 Listen on
Apple Podcasts
Listen on

Slate Plus members get ad-free versions of all Slate podcasts, plus extra segments, bonus episodes, and more. Try it free today.

The saga of Bill Clinton’s impeachment is rich with forgotten characters, surprising subplots, and opportunities to reflect on just how much America has changed over the past 20 years. Whether you’re well-versed in the tale of Clinton and Monica Lewinsky, or you’re fuzzy on the details, this season of Slow Burn will take you further into the story than you’ve ever been.

From its origins in the Whitewater real estate controversy, the Paula Jones sexual harassment lawsuit, and the suicide of Vince Foster, Clinton’s near-removal from office was the culmination of a process that remains poorly understood—and continues to reverberate through our political system today.

While Season I of Slow Burn captured what it was like to live through Watergate, Season II offers a fresh reexamination of the choices, circumstances, and manipulations that nearly destroyed the 42nd president and forever changed the life of a former White House intern.

Read the announcement on Season 3.

Get Your Slate Plus Feed

Copy your ad-free feed link below to load into your player:

Deal or No Deal

For 11 hours, Monica Lewinsky faced off against federal prosecutors who wanted her to help them take down the president and threatened her with decades in jail.

How Monica Got Her Life Back

On resilience and reinvention.

The Clinton administration was mired in scandal from its very first days.

Ahead of Her Time

Bill Clinton faced a lot of accusations. Only some of them stuck.

When the President gets sued.

What happened between Bill Clinton and Monica Lewinsky?

Dick Morris talks about his experience for Bill Clinton.

Linda Tripp exposed Bill Clinton’s affair with Monica Lewinsky. What was she thinking?

Where Linda Tripp Is Coming From

On the Bushes, Clintons, SNL, and more.

The Clinton-Lewinsky scandal sent the religious right into paroxysms of outrage. The rest of the country wasn’t convinced.

Leon’s full-length interview with Ken Starr, and a look back at what teens learned from reading the Starr report.

Clinton’s enemies said his affair made him unfit to govern. What did his friends think?

Exit Through the Rose Garden

One of strangest summer jobs you could have in 1998? Being an intern in the independent counsel’s office.

In 1998, Congress weighed whether Juanita Broaddrick’s rape accusation against Bill Clinton was grounds for impeachment.

Revisting Slate’s coverage of the Clinton-era.