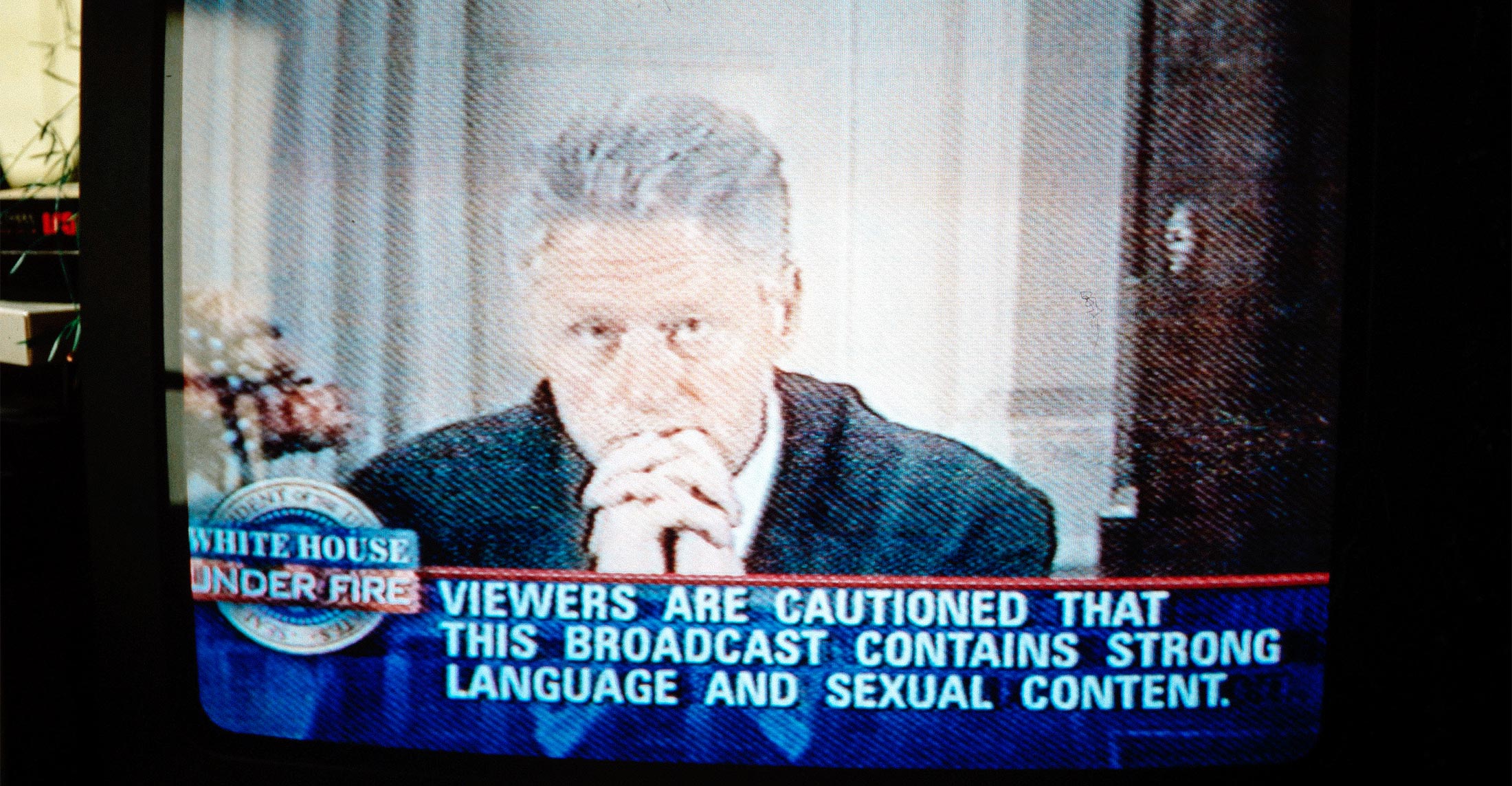 Bill Clinton confesses on television to the American people that he did indeed have sexual relations with “that woman,” Monica Lewinsky. Photo by David Butow/Corbis via Getty Images

A few weeks ago, I read a 2017 essay by Stella Bugbee titled “Being on the Right Side of History in 1998 Sucked.” It’s about how frustrated and isolated Bugbee felt being the only person she knew who thought Bill Clinton was a creep and Monica Lewinsky was a victim. “Oh, fuck you, Bill,” she remembers saying to the television when Clinton declared he “did not have sexual relations with that woman, Miss Lewinsky.” All she could think about, Bugbee wrote, “was that Lewinsky’s dumb affair with Bill Clinton was going to ruin her life. She would become the most reviled woman in the Western Hemisphere, by liberals and conservatives alike. It wasn’t right.”

It’s my sense that a lot of people who didn’t live through the 1990s, or who weren’t old enough at the time to really process what was happening, feel certain that they would’ve sided with Bugbee 20 years ago. It seems obvious now that Clinton’s behavior was wrong and indefensible, and it seems like it should’ve been obvious to everyone back then.

Many of us have spent the past several years re-evaluating the Clinton presidency, and if we’re of a certain age, looking back on our reactions to the scandal that almost ended it. But even people who were fully sentient during the impeachment saga—I was in eighth grade—tend to have only hazy memories of how the whole thing played out. We remember Clinton talking about the meaning of the word is. (He was making a distinction between is and was.) We remember Monica Lewinsky’s stained blue dress. (She didn’t get it cleaned because it didn’t fit, so it seemed pointless.) Maybe we remember that some number of Republican lawmakers pushing for Clinton’s impeachment turned out to have been adulterers themselves. (The number was at least three.) But there are a lot of things we don’t remember—subplots, details, and peripheral characters—that were crucial to how events played out, and should be crucial to how we think about Clinton’s impeachment now.

There’s a quote I think about a lot when I’m writing about the past: “You know what the mayor of memory lane understands? The truth is in what happened, how it happened; not how it felt; not how it feels.” It’s a powerful mantra that has served me well. But when it comes to the Clinton presidency and the scandal that engulfed it, “how it felt” was an essential driver of “what happened.” At every step in the Clinton saga, going back to when he was first elected in 1992, people made decisions and had reactions that now seem inexplicable. (Did Katie Couric really float the idea that Monica Lewinsky was a “predatory girl who set her sights on the president”? Yes, she did.) With the benefit of hindsight, it can be easy to condemn those decisions and reactions. But it’s more fruitful—and more exciting—to try to understand them. What were all these people thinking and feeling when they said what they said and did what they did?

In the first season of Slate’s podcast series Slow Burn, we examined what it was like to live through Watergate in real time. As we embarked on that project, our animating impulse was a desire to know whether the country had ever been through anything resembling what it’s going through now. (The short answer turned out to be yes.) Now, over the course of eight episodes—and eight extras available only to Slate Plus members—we’ll retrace the long, bumpy road toward Clinton’s impeachment. For the next two months, we’ll put you inside the minds of people who went on that journey not knowing what was waiting for them at the end, and who formulated their views on Clinton based on events that many of us no longer remember.

Insofar as our retelling of the Clinton story has a thesis, it’s that it’s hard to know, in the moment, how history will judge us down the line, or what ideas, beliefs, and biases will seem embarrassingly blinkered when we look back at them decades later. This isn’t just true about the Democrats and feminists who sided with Clinton and put down the women unlucky enough to cross paths with him. It’s also true about the Republicans who waged war on Clinton, the journalists who wrote about him, and the prosecutors who built a case against him.

To engage with these questions, it’s necessary to go back to the origins of the scandal, and to revisit the turning points that brought it about. One of those turning points came on Jan. 16, 1998, the day Monica Lewinsky was confronted by the Office of the Independent Counsel and threatened with 27 years in prison unless she agreed to help Kenneth Starr catch the president in a crime. It was a day that Lewinsky will never forget. You won’t either once you hear the first episode of our new season.

Leon Neyfakh, a former Slate staff writer, is the host of the podcast Fiasco.