NATIONAL HARBOR, Md.—Last year, Sarah Palin showed up to the CPAC stage with a Super Big Gulp, a reference to the (then-fading) proposal of New York City Mayor Mike Bloomberg to limit the sale of sodas in his city. (It would not have applied to 7-Elevens.) This year: 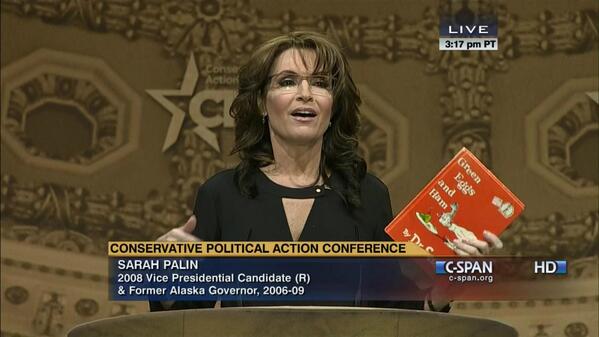 Poor Rick Santorum. On Friday, the probably 2016 presidential candidate whom the media isn’t quite sure how to cover gave a well-received, condensed version of a speech he’s been giving to Republican groups. Its theme: Republicans should not—could not—simply talk about “job creators” and who “built that” business. They needed a positive economic agenda; they needed to realize that government had the power to organize and persuade, just as anti-smoking laws cut down the numbers of smokers to unthinkable lows. And then Sarah Palin closed out the conference by telling “Beltway Republicans” (like her 2008 ticket partner John McCain) to back off of immigration reform because “that victory you won in 2010? You didn’t build that!” Palin’s speech was a pretty typical collection of memes, alliterative insults, and sentence fragmentation, but the one thing that stuck with me was her endorsement of the theory that Ted Cruz’s demand that the CR not include funding for Obamacare was itself the reason that Obamacare had become unpopular. Also, that Cruz had acted on this demand with a “filibuster.” To every pollster and (cough) Beltway Republican, the two-week government shutdown was an obvious and predictable disaster, a real-time bailout of the Democrats that distracted from the absolute nadir of Healthcare.gov’s problems and gave the president a poll boost, and to everyone familiar with Senate rules, Cruz’s marathon speech was not actually a filibuster. It does not matter. On the activist right, the reality is closer to what Palin said.