Brookings fellow and critic of snarky Twitter users Justin Wolfers has put together a chart of the people whose coverage under Obamacare will 1) stay the same, 2) get pricier, 3) get cheaper. It’s making the rounds around the liberal blogosphere and Twittersphere today, as a sort of coping device for the negative turn against the health care law. 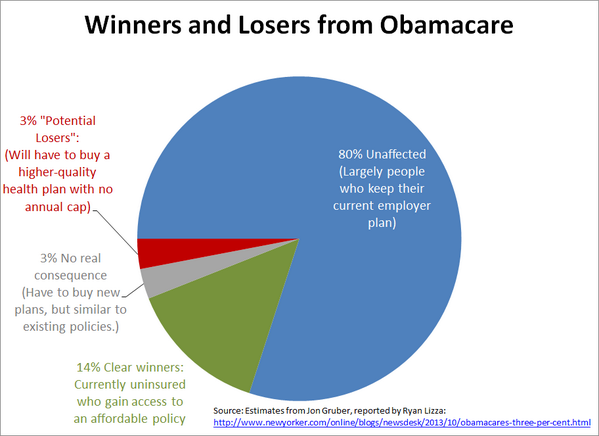 Seems right to me; it so happens that the 6 percent of humans likely to lose their plans and pay more constitute millions of Americans, and that even a small number of them can talk to the media about how horrid the experience is. What they need is a long trench warfare campaign of fact-checking and, occasionally, apologizing. Michael Hiltzik, for example, has reported out the tale of Deborah Cavallaro, a Los Angeles woman spiriting around conservative-leaning shows to explain how Obamacare killed her plan.

Her current plan, from Anthem Blue Cross, is a catastrophic coverage plan for which she pays $293 a month as an individual policyholder. It requires her to pay a deductible of $5,000 a year and limits her out-of-pocket costs to $8,500 a year. Her plan also limits her to two doctor visits a year, for which she shoulders a copay of $40 each. After that, she pays the whole cost of subsequent visits… at her age, she’s eligible for a good “silver” plan for $333 a month after the subsidy – $40 a month more than she’s paying now. But the plan is much better than her current plan – the deductible is $2,000, not $5,000. The maximum out-of-pocket expense is $6,350, not $8,500. Her co-pays would be $45 for a primary care visit and $65 for a specialty visit – but all visits would be covered, not just two.

Is that better than her current plan? Yes, by a mile.