Ted Cruz was heckled* by DREAM Act activists when he spoke to the Values Voter Summit on Friday. Dr. Ben Carson, the neurosurgeon-turned-pundit, called Obamacare “the worst thing that has happened in this country since slavery.” The lamestream media covered both of these instances as damaging, in some way. But the fairly low-participation straw poll taken during the conference gave Cruz and Carson the wins. Cruz led for president; Carson led for vice president. 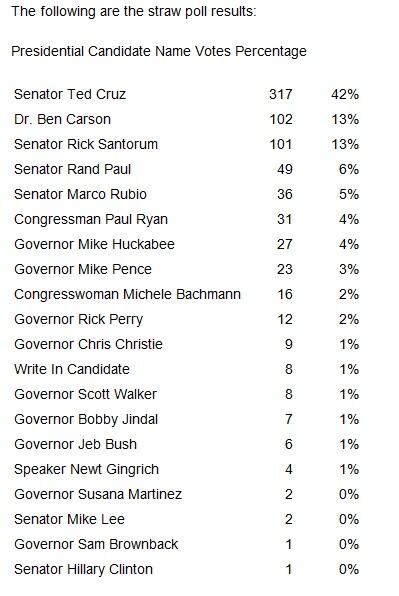 On the way out of that room, I ran into Vernon Robinson, the black conservative and sometimes North Carolina Republican candidate who manned the “Run Ben Run” booth at the conference. He was understandably overjoyed; we shared a fist-bump. The popularity of both men grew out of the certitude that Republicans could “win” the government shutdown, if they only held fast, a sentiment held on both ends of the city today. I heard it expressed best at the Glenn Beck/FreedomWorks cleanup event in the morning, when a Frederick, Md., activist named Regis Campbell told me that Republicans could shut down the government “for two years” if it was the only way to stop the health care law. Pragmatism can wait for 2015. *To be fair, all they said was “Sen. Cruz, why won’t you support a path to citizenship?”