The “Platinum Coin option,” an insane-sounding end-run around the debt limit crisis, was mooted in summer 2011, discussed, and largely dismissed. As my future colleague Matthew Yglesias would explain, a little-noticed series of laws, passed by Republican Congresses, gave the Treasury authority to mint “platinum bullion coins” of any denomination. A coin that cost little to mint could be denominated at $1 trillion, and put in the Treasury – voila, no more debt ceiling crisis. 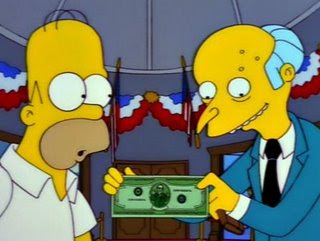 Like I said, it sounds insane, and very few Republicans have even been asked what they thought of this. I checked with Michael Steel, John Boehner’s spokesman. “Wasn’t that the plot of a ‘Simpsons’ episode?” he asked. Indeed, it was. In “The Trouble With Trillions,” an episode from the show’s difficult second decade, Homer Simpon is given a special assigment: Tracking down the $1 trillion bill printed by Harry Truman’s Treasury during the rebuilding of Europe. The Feds believe – correctly – that the bill was stolen by C. Montgomery Burns, who had been given it for safe-keeping as “America’s wealthiest, and therefore most trustworthy, man.” Anyway: Steel continued by saying that “There’s no magic coin to duck the tough choices our nation faces, and the only way to stop spending money we don’t have is to stop spending money we don’t have.”