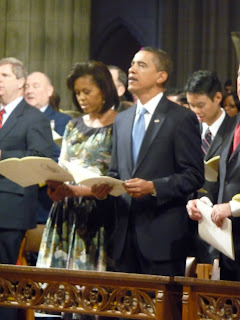 Today I reaffirm my endorsement of Barack Obama as president of the United States. I have found him to be a person of integrity, intelligence, and genuine good will. There is a good distance yet to travel, but he has already moved the nation and the world beyond its religious and racial divides …


On Easter, we remember something far more important than anyone’s political endorsement: namely, that “God so loved the world that He gave his only begotten Son, that whosever believes in Him should not perish, but have everlasting life.”
And while John 3:16 is conveyed uniquely in Christ, let us remember that when our actions and assessments of each other are grounded in the love those words express, the fact that we have learned to think as Christian, Jew, Muslim, Native American, Hindu, Buddhist, or Bahai does not mean we cannot love as one.
Advertisement