This question originally appeared on Quora.

Sort of. It’s somewhat complicated since there are genetic as well as environmental components to this.

Natural lactase production is genetic, but is not the only thing that determines lactose tolerance. Illness, damage to the small intestines, and the composition of your gut bacteria can all affect your level of lactose tolerance.

The Basics
When lactose enters the body, it’s cleaved by the enzyme lactase into glucose and galactose via a process known as hydrolysis. 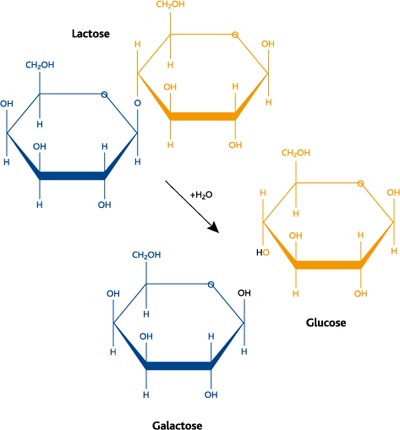 Once lactose has been cleaved into glucose and galactose, those two simple sugars can be absorbed by the body and used as energy. However, when lactose isn’t broken down in the small intestines, it moves to the colon, where it interacts with the bacteria there. Bacteria in the colon can break down some of the lactose, but it produces various gases in the process. The rest of the intact lactose draws water into the colon via osmosis as it passes through. I don’t think I need to go into detail as to what excess gas and water in the colon can lead to … But there you have it, hallmark symptoms of “lactose intolerance.”

The Genetics
Lactase (the enzyme that breaks down lactose) is produced by cells in the lining of the small intestine. All humans have the ability to produce lactase during infancy, but for many, that ability is turned off in adulthood. In Caucasians, the rs4988235 variant in the MCM6 gene acts as the switch to regulate the expression of the lactase gene (LCT). Individuals can have one of three genotypes (GG, AG, and AA). Those with the GG genotype are known as lactase non-persistent (aka likely, though not necessarily, lactose intolerant). Lactose intolerance resulting from the downregulation of LCT is known as primary lactose intolerance. If you’re really curious, 23andMe can tell you which genotype you have.

Sidenote: the GG genotype is native, and mutations that allow for lactase production in adulthood came fairly recently (evolutionarily speaking).

The Environmental Factors
This is where things can get pretty complicated, the major factors at play are the health of the small intestine and the composition of gut bacteria.

The composition of gut bacteria can also contribute, although their effects are complicated and not fully understood. We know that your gut is abundant with microbea: so abundant in fact, that they outnumber your own cells by a factor of 10. These bacteria are busy doing so many metabolic activities that they can be thought of as an additional organ.

Some gut bacteria produce lactase, which can can compensate for a natural lack of the enzyme. Lactic acid bacteria (LAB)—found in some yogurts—is an example. This may be one reason why people who can’t tolerate milk sometimes have no symptoms when eating yogurt. However, there may be other factors—such as intestinal transit time—involved as well.

As mentioned previously, lactose in the colon interacts with the resident bacteria and gets broken-down into simple sugars (glucose and galactose). These sugars can be further metabolized into short-chain fatty acids and other metabolites. How much (and how quickly) these compounds accumulate and are removed varies depending on the types of bacteria present. Certain gut flora compositions lead to higher accumulation of these compounds during fermentation, and may be a potential cause of lactose-intolerance symptoms.

Radiolab did an awesome show on the gut a few months ago, including a segment on gut flora: http://www.radiolab.org/2012/apr…

If you’re not easily grossed out, you might find this article fascinating:
http://www.bbc.com/future/story/…

So, what can you do to turn lactose intolerance into lactose tolerance?
Well, if you are among those lucky enough to have the lactase-persistence genes, then keeping your gut healthy is a good idea. If you aren’t lactase-persistent, then your options are more limited. You could try taking probiotic bacteria dietary supplements, or eating probiotic yogurt, but it’s unclear whether or not these measures work.